The Solving Plastic Issue: In Depth

What Comes After This Plastic-Filled Pandemic?

The Solving Plastic Issue: In Depth

What Comes After This Plastic-Filled Pandemic?

A new generation of medical professionals is tasked with undoing decades of hospitals’ easy reliance on single-use plastic.

Why you can trust us
By Jaime Kaiser
4 MIN READ

When Jodi Sherman first started working in hospitals, she was struck by the amount of plastic used on a daily basis. She wondered how single-use plastics could be consistent with the Hippocratic oath’s first principle to “do no harm.”

“It’s clear that these materials come from somewhere and they go somewhere and they must be causing harm,” says Sherman, an anesthesiologist at Yale New Haven Hospital and founding director of the Program on Healthcare Environmental Sustainability at the Yale Center for Climate Change and Health.

But not all of her colleagues and patients see it that way, since plastic is an embedded feature of patient care. According to the Healthcare Plastics Recycling Council, 20–25% of all hospital waste in the United States is plastic—amounting to more than 1 million tons annually.

This wasn’t always the case—plastic’s prominence in hospitals dates back less than 100 years. But during the postwar plastic boom of the 1940s, medical professionals seized on its utility.

“The temptation for mass one-use disposal was irresistible,” says Robert Friedel, professor emeritus of history at the University of Maryland.

That temptation was only amplified by plastic’s convenience, relatively low cost, and efficacy in certain situations, adds Friedel. Rigid plastics revolutionized products like the hypodermic syringe—historically made from glass—by making it cheaper to produce at scale.

Even the plastic straw—a source of modern consternation—has roots in medicine. In 1937, Joseph Friedman invented what we now know as the bendy straw, though his model was made from paper. His first sale was to a hospital, after nurses recognized its utility for patients with limited mobility.

“The medical community got away with it for a very long time, but the sheer volume of medical waste is beginning to catch up with them,” Friedel says.

Many medical facilities across the U.S. have some kind of recycling program, but market disruptions, factory closures, and pandemic-related shipping delays have introduced hurdles to seamless recycling.

“The recycling market for certain plastics in health care [is] very troublesome right now,” says Janet Howard, member engagement director with Practice Greenhealth, a nonprofit that, among other health care sustainability efforts, partners with medical providers to reduce waste. “We’d rather look for opportunities to go back to reuse.”

But getting medical professionals and patients to be comfortable with reused plastic that’s been exposed to a world of pathogens—especially in the middle of a global pandemic—can be tough. It involves getting over what Howard calls the “ick” factor of health care and undoing decades-old cultural beliefs in the sanitary nature of single-use plastics.

Certain items, like small IV tubing and IV catheters, would be dangerous to reuse, Sherman says. But many other items can be. The World Health Organization reports that 85% of medical waste is not infectious. And evidence shows that many items could see a second life through Single-Use Device Reprocessing, though the process has its critics.

The process allows for the FDA-approved disinfection, cleaning, and remanufacturing of certain items with plastic parts like pulse oximeter sensors and tourniquets.

In other cases, the solution may be to revert to rigid, reusable plastics and glass containers, rather than the flimsy throwaways that replaced them.

Blue wrap is a conspicuous contributor to plastic waste in operating rooms. The #5, bright blue polypropylene plastic is used to sterile-wrap surgical equipment. The total amount of blue wrap waste is astonishing: One Canadian study found that just one type of surgery—total knee arthroplasty—generated more than 167,000 pounds of blue wrap waste from 2008 to 2009 in Canada.

But Practice Greenhealth suggests that blue wrap can often be easily replaced with reusable hard cases that don’t need to be tossed after just one use. And they can save hospitals money along the way.

Hospital sharps containers offer another simple opportunity for reuse. Instead of chucking the whole container—used to safely dispose of needles and other sharp biohazardous waste—reusable containers can be taken to a processing facility to be emptied and disinfected.

Howard says the pandemic has highlighted how building out local supply chains, rather than banking on international manufacturers, can strengthen reuse and recycling projects.

“Our work [at Greenhealth] is really connected to community resilience,” Howard says. “The good news is that working with local businesses and putting down your roots in your community, investing in the local businesses, prepares you for crisis. And that could be extreme weather events, or it could be a pandemic. Whatever it may be.” 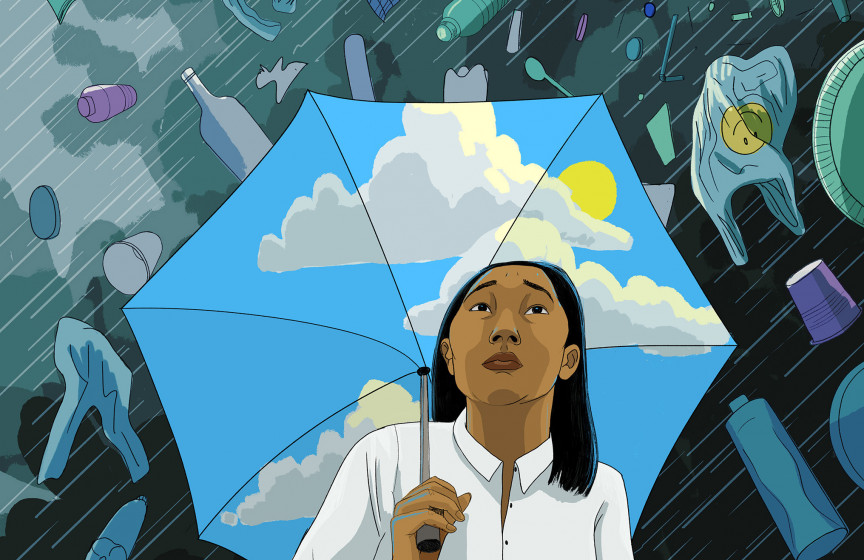