People Used to Sleep Twice a Night, With a Break in Between: 7 Ways to Connect With Our Wild Human Roots

People Used to Sleep Twice a Night, With a Break in Between: 7 Ways to Connect With Our Wild Human Roots

Color like a butterfly, eat like an ancient healer, and other ways to rediscover your inner wildness.

Better Tech on the Wings of Butterflies and Peacocks

Pigment doesn’t create the iridescent blue of the Morpho butterfly. The vivid color comes from powdery scales on its wings, which are tiny crystals that interfere with wavelengths to reflect light—and color—at different angles. Feathers, fish scales, and beetle shells work the same way. Now, humans are using this technique to create thin, low-energy color displays in electronic devices. The Qualcomm Mirasol Display mimics the evolutionary technology in butterfly wings, using microscopic mirrors to create colors. The display uses ambient light to produce color, so it consumes one-tenth the power of an LCD display and is readable in sunlight.

Reconnecting Atlanta With the Forest

With 2,000 miles of decaying water infrastructure and almost-yearly drought conditions over the past decade, Atlanta faces the sort of water crisis that is becoming increasingly common throughout the United States. An award-winning design by a group of architects and engineers shows how returning Atlanta’s urban landscape to the forest would restore water to the city. The proposed 100-year plan envisions a city redesigned to suit its natural geography. Transit and density would concentrate along ridgelines, freeing the watershed’s natural basins from development and allowing river, wetland, and forest systems to re-emerge in lowlands throughout the city.  The design provides a place for city stormwater to collect, seep underground, and be stored—a natural filtration process that would save an estimated $1.7 billion in a city where maintaining and replacing existing water infrastructure will cost $3.9 billion. And storing water in forested urban wetlands would retain the scarce resource in the city, rather than flushing it out to sea.

Source: EDAW and The History Channel.

In Tough Times, It’s in Our Nature to Cooperate

Peter Kropotkin was a zoologist, geographer, and activist in pre-revolutionary Russia.  When he was posted to remote government jobs in Siberia and Manchuria, he spent three years observing and writing about human and animal communities. Cooperation, he found, was more important for survival than competition, especially under harsh conditions. Kropotkin watched pelicans paddle in a narrowing circle to herd fish, chamois adopt orphaned young, and captive Molucca crabs spend hours trying to right a flipped comrade.  “Sociability is as much a law of nature as mutual struggle,” he wrote in his 1902 book, Mutual Aid: A Factor in Evolution.

In a photograph by Rachel Sussman, the ancient welwitschia plant appears alien, its shredded leaves a tangle of tentacles in the Namib-Naukluft desert. It’s been alive roughly since year zero of our modern calendar. But it’s a baby compared to some other organisms Sussman has photographed for her Oldest Living Things in the World project. Many of the subjects in Sussman’s portraits have been around since before the first recorded history 5,000 years ago, while some predate humans altogether. Sussman says researching and photographing ancient life all over the world puts human mortality into perspective. “I have a more immediate understanding of the briefness of a single human life,” says Sussman. “At the same time, when standing in front of these organisms, I feel a connection to the moments that shape a constantly unfolding narrative on both a micro and macro scale. Any given moment matters.”

Two Sleeps a Night, and Maybe a Nap

The modern conveniences that increase our productivity and synch us up globally—electric light, jet travel, computers—may also be disrupting our bodies’ natural sleep cycles. The phenomenon called the post-prandial dip—that drop in energy after lunch—was traditionally treated by many cultures with an afternoon nap, a practice largely abandoned today. And science writer Jesse Gamble reports that in the absence of artificial light, humans revert to biphasic sleep that is quite different from the standard sleep pattern in industrialized society. Rather than an uninterrupted eight-hour block, we naturally sleep twice per night in roughly four-hour segments: from just after sunset until midnight, and again from 2 a.m. to sunrise. In between is a quiet, meditative time during which humans historically talked, went for a walk, or connected with a partner. Today, night waking is often diagnosed as insomnia and corrected with sleeping pills, but a book may be a better prescription. And a midday nap.

The Call of the Wild: How Green Can You Go?

Sustainability isn’t enough to save the Earth, according to Miles Olson. Instead, he lives as close to nature and as far removed from civilization as possible. Squatting in the woods in a cabin built from salvage, Olson barters rather than buys, and uses pre-industrial skills to gather, grow, trap, and forage food. In his book Unlearn, Rewild, he gives how-tos on everything from preserving meat to doing what bears do in the woods. It’s what Olson calls “rewilding the human”—a dark green, and deeply satisfying, way back to nature. Unlearn, Rewild: Earth Skills, Ideas and Inspiration For the Future Primitive, New Society Publishers.

The 6,000-year-old theory and practice of Chinese traditional medicine emphasizes the connection between human health and nature. Our bodies are influenced by the external world, according to this view, and the cause of illness varies with the weather and the season. We can work to stay healthy by eating seasonal foods that help our bodies adapt to Earth’s natural cycles. Here’s a four-season menu:

Spring—As our bodies emerge from winter torpor, they’re a bit weak and vulnerable. Fresh leafy greens are just the things to stave off a spring cold. 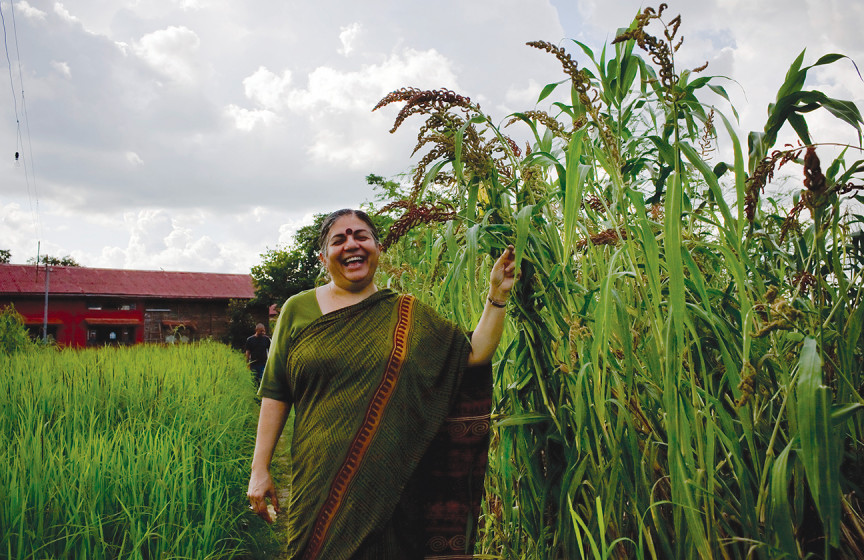