Alicia Garza with the Bay Area chapter of #BlackLivesMatter. Photo by Kristin Little.

Alicia Garza and two friends first tweeted #BlackLivesMatter to spark a conversation after the death of Trayvon Martin.

Why you can trust us
By Liz Pleasant
4 MIN READ

Following the police killing of Walter Scott in North Charleston, South Carolina, TIME Magazine hit newsstands with a cover dominated by large, block letters: “Black Lives Matter.” #BlackLivesMatter has infiltrated America’s modern vocabulary. It’s the rallying cry for a movement that began getting a lot of national attention after the police killing of Michael Brown in Ferguson, Missouri.

But #BlackLivesMatter began before Ferguson.

When George Zimmerman was acquitted of murder charges after killing Trayvon Martin, Alicia Garza of Oakland, California, turned to Facebook to express her anger and sadness. As a longtime social activist, Garza, who is now 34 years old, had been working for years to end systemic racism. She had led activist movements in the San Francisco Bay Area, from efforts to expose and end police violence to actions to secure free public transportation for youth. Currently, Garza is the special project director at the National Domestic Workers Alliance, where she works to protect the rights of black women employed in positions like housekeeping, childcare, and in-home aid.

Garza says that the moment she logged onto social media after the announcement of the Zimmerman verdict was eye-opening. She was bombarded with defeatist comments like “What did you expect?” or “I knew they would never convict him.” Overwhelmingly, these comments all pointed out the same thing: It’s treated as acceptable for unarmed black boys and men to be killed without consequence.

Garza knew that the criminal justice system was not going to address this problem. To fill that void, she and her friends Patrisse Cullors and Opal Tometi founded #BlackLivesMatter to spark nationwide discussion of the way black lives are consistently undervalued in America and what people can do to change that. “We really felt like there needed to be a space that people could relate to that didn’t blame black people for conditions we didn’t create,” explains Garza.

“When we began, #BlackLivesMatter was a series of social media platforms that connected people online to take action together offline,” says Garza. At the time, the three women were involved in Black Organizing for Leadership and Dignity (BOLD). Access to that national network helped their message spread quickly, and soon activist organizations across the country were using #BlackLivesMatter to shine light on underreported incidents of black people being attacked or killed by police.

Now, more than three years after the death of Trayvon Martin, the phrase has become a rallying cry for a new wave of resistance in places like Ferguson; Staten Island, New York; and Baltimore, Maryland, after the police killings of Michael Brown, Eric Garner, and Freddie Gray. And it’s more than a hashtag—it’s a civil rights movement.

#BlackLivesMatter has inspired important in-person gatherings and conversations around race, prejudice, and police brutality across the country. Garza saw some of those conversations firsthand when she traveled to Ferguson as a participant in the Black Lives Matter Ride.

The ride, largely coordinated by Cullors-Brignac and fellow activist Darnell Moore, was an effort that got more than 500 black folks from across the country to Ferguson through organized transportation and lodging. Once they arrived, participants offered their skills and expertise to the cause, including medical aid, legal assistance, and advice and support for the new group of organizers developing in the wake of Michael Brown’s death.

“It was incredible,” says Garza. “Black people of all stripes coming together to love on one another, committed to our collective transformation.”

One reason the reach of #BlackLivesMatter has spread so far is that it’s more inclusive than traditional civil rights movements. “Our diversity in leadership is an important component,” says Garza. “We have diverged from a model that is about following one charismatic leader, usually a man who is straight.”

Leaders of the movement include, for example, many black, queer women. In part because of that diversity, #BlackLivesMatter is changing the landscape of the modern black civil rights movement in America. It has brought people together who have traditionally been hard to get on the same page.

There are elders, mothers and their children, queer people, and straight people, all united around this movement and determined to bring black lives to the center the of the conversation and demand that black voices be heard. “Love is what sustains us through all the hardships that come with this work. Even love for people who disagree,” says Garza. “Love is what will ultimately get us to a place where we can change the world we live in.”

Everybody is gathering around one basic concept: #BlackLivesMatter. All of them. And whether it’s in our small, daily interactions or by our biggest governmental institutions, every life should be valued.

Although her work requires her to travel often, Garza says her local #BlackLivesMatter chapter in Oakland still feels like home. Twice a month, the group meets to organize around topics like political education, faith and spirituality, long-term movement strategy, and direct action plans.

“It’s such an incredibly beautiful space to see emerging leaders and seasoned leaders supporting and nurturing one another,” says Garza. “And to see blackness celebrated and valued.”

The story of this movement’s inception is proof that their mission is possible. Three years ago a group of friends got together to share their grief and frustration. Now, they’ve sparked a national conversation about racism and unlawful police force and inspired people across the country to stand up and fight against injustice.

“It’s really special to me that if I’m wearing my #BlackLivesMatter shirt, brothers on the corner ask me how they can be involved,” says Garza. “I’ve been praying for a moment like this one my entire life.” 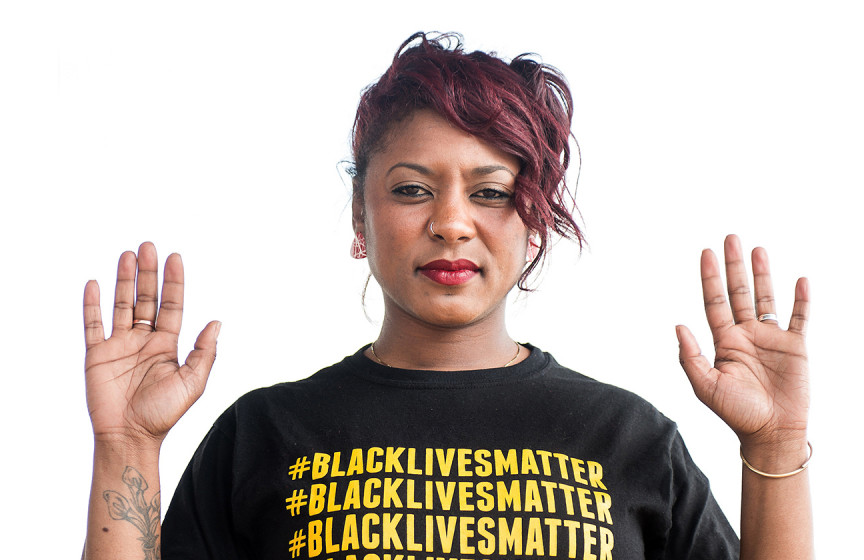