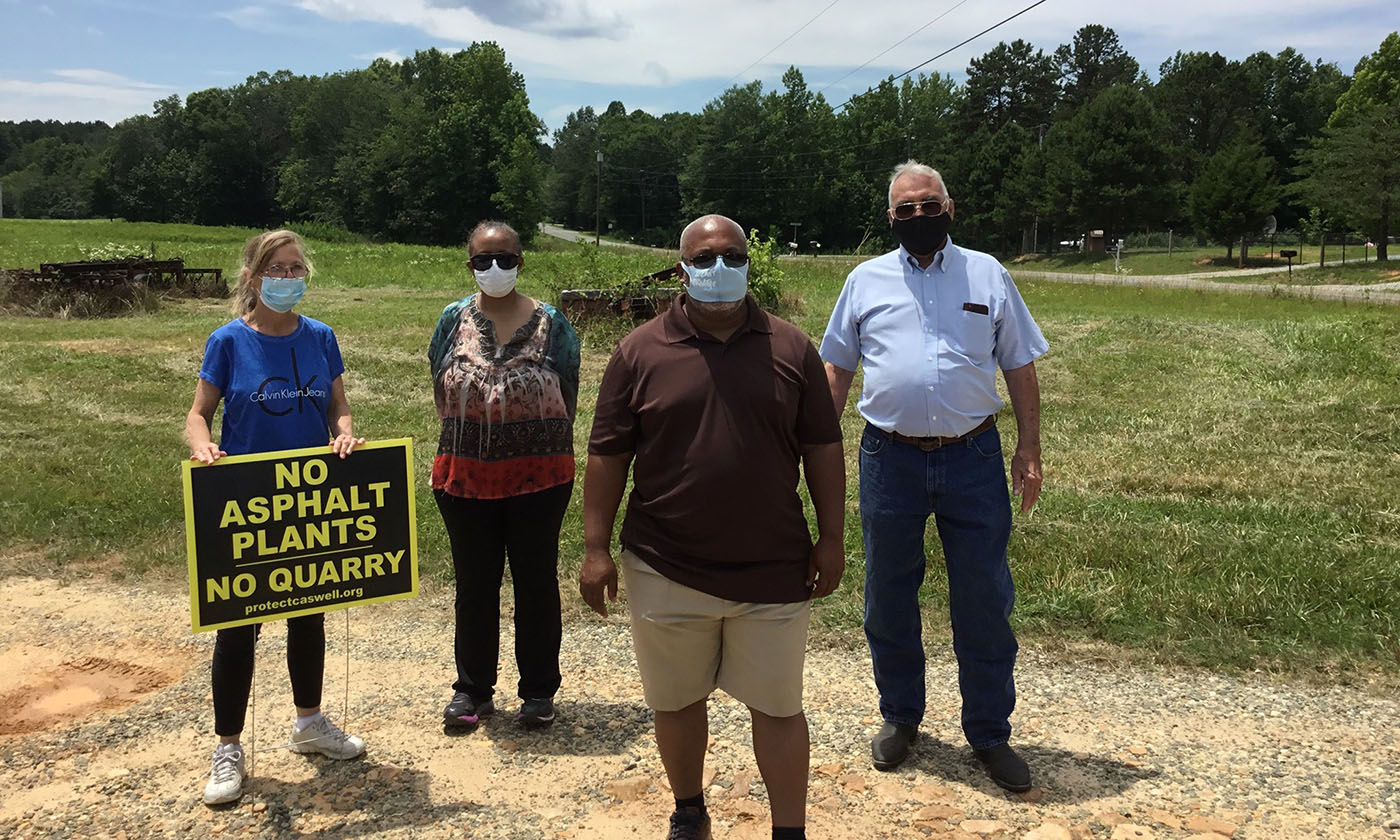 On Thanksgiving Day 2019, right after Caroline Laur had finished giving thanks for her home, a neighbor at church told her that a company had submitted permit requests to build an asphalt plant in their community. The plans indicated the plant would be 250 feet from Laur’s backdoor.

Laur has a premalignant blood disease, and for the past two years, she has been trying to build up her immune system to prevent the disease from evolving into a terminal form of cancer. “When I heard about this plant,” Laur says, “I went to the Duke Cancer Research Center, and a Duke scholar in my illness told me this would be a life-threatening situation for me, and I would have to leave.” Having to move from her home, where she has lived for 15 years, would be devastating for Laur, not to mention a monetary loss. Who would buy a home 250 feet from an asphalt plant?

Laur lives in Anderson, North Carolina, a rural township with just over 2,000 people (and zero cell towers). It is one of the many predominantly Black communities in the United States experiencing a perfect storm of injustices threatening the health of residents and their environment.

An informal community survey shows that more than 70% of Anderson residents are Black, while the county and state’s populations are 32% and 22% Black, respectively. Predominantly Black neighborhoods in the U.S. have historically been exposed to higher rates of air pollution. Specifically, Black people in America are exposed to about 1.5 times more particulate matter—a form of air pollution known to cause cancer—than White people. This exposure leads to higher incidences of health problems such as heart attacks, asthma, and decreased lung function.

A growing number of studies show polluting facilities are disproportionately located in Black and minority communities, so it’s hardly surprising that the asphalt plant was slated for construction in Anderson. A 2018 study from the Environmental Protection Agency concluded that the discrepancy goes beyond geography or poverty, too: Not only are more factories in minority neighborhoods, but these factories are more likely to produce greater emissions than those in non-minority neighborhoods.

These days, the risks are even higher. Because exposure to air pollutants decreases lung function, communities in polluted areas are more susceptible to COVID-19; a recent Harvard study found that people in areas with high particulate matter are 8% more likely to die of the coronavirus than those in areas where the pollution is just one unit lower. That’s been borne out in North Carolina, where Black residents make up 33% of the state’s 1,568 COVID deaths as of July 15, despite only making up only 22% of the population.

The plant that would threaten Laur’s health and home was awaiting the approval of an air permit by the North Carolina Department of Air Quality which, if approved, would basically greenlight the project. “This made me get out and go door to door,” Laur says. One by one, she alerted her neighbors to the prospect of the asphalt plant. “I got to meet some of my neighbors I never knew before,” she says. “There’s no secret that there has always been a pretty strong line between the White community and the Black community here.” In the end, three neighbors joined her efforts—the Rev. Bryon Shoffner, Anita Foust, and Bill Compton. Together, they formed the Anderson Community Group to advocate for environmental justice in their community.

“We are all the four corners of the community,” Laur says with a laugh. “You’ve got a sick old White lady, Rev. Shoffner is a disabled vet, you’ve got Anita, who is a Black woman, and you’ve got a White, old country farmer. We all come from different faiths, but we’ve all come together as one.”

Suddenly thrust into activism, the group contacted the North Carolina Environmental Justice Network, a coalition that provides resources and connections with other groups. “We advocate, we organize, and we assist communities with whatever actions they are thinking of trying to protect themselves,” says Naeema Muhammad, the network’s co-director. Muhammad met with the activists from Anderson and recognized their need for legal advice, so she connected them with the Lawyers Committee for Civil Rights Under Law. The legal resources were key when the group determined that the data from the North Carolina Department of Environmental Quality’s environmental justice report wasn’t adding up.

We are all the four corners of the community.

The report—a requirement for all DEQ permit requests—stated that the Anderson community was 33% minority. That seemed far too low to the residents, so the Anderson Community Group did a census of each house within a 1-mile radius of the proposed plant—the same radius considered in the DEQ’s environmental justice report.

“Rev. Shoffner went out into the community and did his own survey and found out that it was more than 70% minority,” Laur says. “That was huge, because that changed the situation to a Title VI matter.” Title VI is a federal civil rights law that prevents people from being discriminated against on the grounds of race, color, or national origin. Title VI cases require a more rigorous and comprehensive environmental justice report, so recognizing the Anderson community as a Title VI matter increases the strength of their request for a more in-depth report.

The massive difference in race demographics comes down to census data, Laur says. The DEQ was using race data from the 2010 census, which was only completed by about 64% of the population of Caswell County—the county where Anderson is located. Laur says the Anderson population response rate could be even lower because the community is considered “hard-to-count” by the U.S. Census Bureau.

“The people who don’t fill it out are rural people who want to keep their land and don’t want zoning and minorities,” Laur says, which creates skewed race demographics. The Anderson Community Group said that when they brought up this issue with the director of North Carolina DEQ, he said he was aware of the problem.

“So that tells me that all the EJ reports in North Carolina that have been done may not even be valid, just like ours,” Laur says. “We were told that we are the first [community members] who have ever doubted it and checked it out.”

Determined to have new data collected, the Anderson Community Group rallied in early 2020. After learning from the state Department of Air Quality, the department responsible for approving or rejecting the asphalt air permit, that 100 statements of concern from community members would be sufficient to trigger a public hearing, the Anderson group gathered letters of concern from their community. They submitted more than 108.

“Then we were told there wasn’t enough concern to have a public hearing,” Laur says. “So, we started inundating the [Department of Air Quality director with emails and phone calls from the community.”

Finally, in February 2020, the DEQ declared a public comment period for the issue, effectively placing the air permit for the asphalt plant on hold until a public hearing August 3. The public hearing will be held online because of COVID-19, but Laur says most people in Anderson don’t own computers, and won’t be able to attend. When the community group filed a complaint regarding accessibility, the DEQ then allowed public comments to be submitted via voicemail.

“Well, we don’t have a cell tower out here,” Laur says. She has personally never been able to use her cellphone in her home, and even her landline phone drops calls frequently. Even being able to afford a landline is a luxury in Anderson, Laur says.

The health impacts on the community could be huge.

To make sure community voices are heard, Laur says, the Anderson Community Group is “begging, fighting, scratching, and screaming” for the public comment period to be extended until the hearing can be held in person. The group fears that the community won’t be able to properly participate, and as a result, the DEQ will approve the asphalt permit without listening to residents’ concerns or considering accurate data.

The health impacts on the community could be huge. During Shoffner’s unofficial survey, he also found that more than 90% of those within a 1-mile radius of the proposed plant have health conditions such as asthma, lung disease, and previous strokes and heart attacks that would be exacerbated by polluting industries.

“That’s the thing that we feel they are truly missing: They’re not allowing data to catch up,” Shoffner says. Not only is the existing data outdated and inaccurate, he argues, but even data from 2018 would only provide a partial picture, because it does not account for the effects of COVID-19 on the community. “Of course, our ultimate goal is for them to say they’re not going to build a polluting industry in a Black neighborhood, but our next move is to get them to postpone it until they get the data that shows how the asphalt plant and COVID-19 is affecting Black and brown people.”

Shoffner says that the pandemic has thankfully slowed down the whirlwind of decisions on the asphalt plant and given the team time to consider what else they can do to halt its construction. For example, in July, the group created a mail-in petition for the North Carolina governor to stop the permit process.

“This team has been able to research and dig and get in a lot of doors,” he says, noting that they have had productive conversations with leaders from the North Carolina DEQ. “We’re winning as long as we’re on the phone and getting conference calls. When they stop taking our calls, that’s when we’ll start asking what to do now.”

CORRECTION: An earlier version of this story incorrectly identified Anita Foust. Text has been updated.